Kannagi in the Royal Court 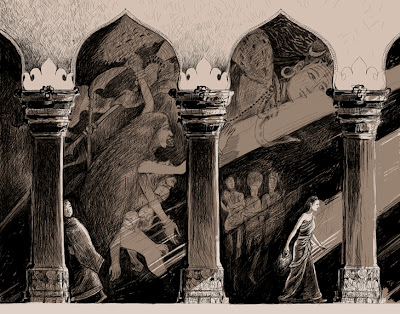 My new piece "Kannagi at the Royal Court" has just been selected to be part of the "I Have the Right" exhibit on art & human rights sponsored by the PICTURE Art Foundation (http://www.pictureartfoundation.org/). Thank you PICTURE Art Foundation, and congratulations to all the artists who participated!

Where did the idea of "human rights" come from? We often assume it originated in 1948 with the Universal Declaration of Human Rights by the United Nations. Most people would be hard-pressed to come up with other sources for the idea of "human rights," perhaps (in a pinch) citing some texts from the 18th century European Enlightenment. In any case, most people pretty much equate the rise of "human rights" with the rise of modern Western democracies. However, it is a mistake to think that only modern (or Western) societies have exhibited a concern for "human rights." In fact, there is increasing evidence to show that pre-modern, non-Western cultures all over the world have supported ideas of "human rights" for centuries, mostly through story-telling. Also, most of the political and social ideas of these cultures were rooted in religions. Therefore, it's fair to say that many pre-modern, non-Western religions have also advanced (or at least supported) ideas of "human rights." One such example from India is the story of Kannagi from the Tamil epic Cilappatikaram ("The Tale of the Anklet," circa 2nd century CE).

To explain the piece, I quote from my writeup in the exhibition catalogue:

In our thinking about human rights, we often privilege those international texts such as the Universal Declaration of Human Rights (1948), which codified for the first time “the common standard of achievements for all peoples and nations.” But these texts are not the only ones. Traditionally, families, communities, and societies shared stories that expressed the human need and struggle to speak “truth” – the truth of dignity, respect, and justice – to power. These stories, passed down over generations often through elaborate oral traditions, continue to give meaning, vibrancy, and legitimacy to such universal texts. Indeed, they are the very narratives that inspire us to set down our common standard of achievements for all peoples in the first place. Through these stories, compassion is cultivated and strength in our common purpose is nurtured.
This piece returns to one such story from classical India, the story of Kannagi from the Tamil epic Cilappatikaram (The Tale of the Anklet). In this famous story, Kannagi, a Hindu housewife of no particular social status or means, boldly confronts the Pandyan king in the South Indian city of Madurai after her husband is executed in a miscarriage of justice. Kannagi’s husband was mistakenly accused of stealing the Queen’s pearl-studded anklet after he is caught trying to sell an anklet (his wife’s, a ruby-studded one) in the local marketplace. He is executed the same day without trial or due process. Furious and distraught, Kannagi storms into the royal court clutching her other remaining anklet and confronts the king. She smashes the anklet against the ground, revealing that it has rubies inside, not pearls. The king, recognizing his terrible mistake, announces that he has behaved inappropriately for a sovereign of the people and promptly dies on the spot from guilt and shame. His wife, the queen, says she has nothing to live for either and joins him in death. Kannagi’s fury is unabated, however, and in a controversial part of the story she commands the gods to burn the city of Madurai to ashes, leaving only the just and innocent people alive. After this, in a common concluding motif of Hindu epic tales, she wanders to a nearby village and, after her worldly trials and tribulations, is herself reabsorbed into the Divine, becoming the goddess Madhurakali Amman (a version of the Hindu goddess Kali). Her temple can still be viewed today in the town of Siruvachur in Tamil Nadu.
Kannagi is, as Eric Miller wrote in the Indian newspaper The Hindu (June 16 2006), a “global symbol of justice, and of the dignity of the individual.” Her story has inspired many adaptations and depictions in popular culture right up to the present day, including in film and books. During the late 1960s, the company Amar Citra Katha, translated as the “immortal captivating stories,” sought to make the great Indian epics accessible to young children by depicting them in comic book form. In the present work, Tom pays homage to this format through a comic book-like depiction of the narrative in the medium of digital print. In the image, the viewer looks through the pillars of the royal palace in Madurai at Kannagi, who is on her way to the royal court to confront the king, anklet in hand. Reality and illusion is blurred in the forms behind her. The brahmin priest she rushes past turns to look at her curiously, unaware of the larger significance of the divine forms that follow behind her and prefigure her quest. In classical and medieval Hindu society, the dispensing of social justice (dharma) was related to religion (also referred to by the same Sanskrit term, dharma). Both reflected the overall socio-religious worldview, which advanced four interconnected goals of life: pleasure (kama), wealth (artha), justice/righteousness (dharma) and liberation (moksha). Each sphere depended on the successful functioning of the others within a larger cosmological worldview that hinged on notions of karma (reciprocal action) and kripa (divine grace). When the king did not maintain dharma properly, the cosmic order of the universe and society was threatened. In this way, Kannagi’s quest for social justice and human rights resonates with both modern struggles for human rights (especially for due process in trials) and is also intimately connected to the traditional Hindu socio-religious sphere as the story of one woman’s fight to uphold dharma. In the present work, Kannagi is shown pursued by the shadowy figures of the goddess Kali, her divine double and symbol of both her righteousness and wrath, whom she becomes at the end of the story, and the god Shiva, the main deity and protector of the city of Madurai. Also depicted is the marriage of Minakshi, the sister of the god Vishnu, to Shiva, which is itself a defining symbol of both the city of Madurai and of Kannagi’s own marriage, the central element in her fight for justice on behalf of her husband.
Posted by Tom at 5:00 PM